What is a Wireless Bridge?

In short, a wireless Ethernet bridge is a device which connects two or more local area networks (LAN) using wireless access points so that they can communicate with each other. In a typical wireless bridge setup the access points on either side of the wireless connection, or bridge, connect with a wired LAN.

Some wireless access points can operate as either an access point only or a bridge only. Normally this feature is enabled or disabled via a configuration screen. If they are configured as bridge-mode only, then wireless LAN bridging is also called a Wireless Distribution System.

Why Use An Ethernet Wireless Bridge Setup?

A typical scenario for making use of a wireless bridge would be a spot in your home where you have two or three network devices, such as a TV with a Boxee Box, Xbox 360 and a wired personal computer within a short distance. You have a wireless router in your home, but none of these devices have a wireless adapter. Running an Ethernet data cable is also not possible. In this scenario you have really three choices:

What the wireless bridge solution provides is a method of connecting these few network devices to the rest of your home network using a wireless connection.

Examples of a Wireless Bridge Setup

, connects a Networked DVR Receiver, Networked Media Player, Gaming Console and Networked Blu-ray player which are all connected to an HDTV to the rest of the home network. 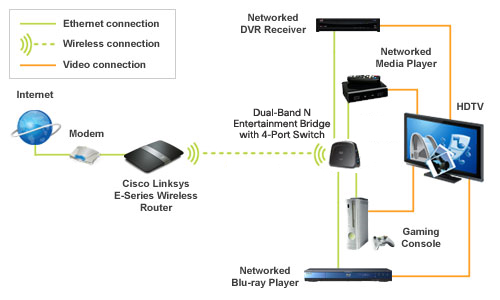 Another example can be found on Cisco’s Configuring an Access Point as a Wireless Bridge knowledge base article. Here they make use of a Cisco-Linksys WAP54G Wireless-G Access Point

which is configured for wireless bridge mode. In turn, it will only communicate with another Linksys Wireless-G Access Point (WAP54G).

The WAP54G uses the older 802.11g specification, instead of 802.11n, so the above examples should work fine if the intended usage for these wired computers is simply to access the internet and other network devices such as a printer or file sharing with another computer. If a wireless connection to home entertainment devices is needed, stick with the newer, faster 802.11n specification.

line of products (The official company website page for Ubiquiti Networks). Or contact a local supplier who can help you with the service and installation.

Wireless bridges are a very practical, easy, and in most cases an affordable way to connect Ethernet LANs in different parts of your home. They are quick to set up and easy to configure, making them an ideal choice to quickly set up a data network. For many people, the newer, faster wireless N bridges based on the 802.11n specification will be more than adequate to meet their needs without having to resort to an expensive data cabling solution.