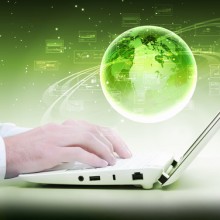 A simple definition of broadband is that it is high-speed internet access which is faster than traditional dialup access and it is “always on”. With broadband access there is no need to reconnect each time to the internet and it also does not block your normal wired phone usage.

Broadband internet access is typically a higher quality service, allowing you to stream video, download large amounts of data and establish real-time connections with other users for different forms of social sharing, including phone service.

There Are Six Basic Types of Broadband Connections

Many people had their first experience with broadband internet over a cable modem. It’s used with your local cable television service provider when the broadband data signal travels over the same coaxial cable as your television signal. It doesn’t interfere in any way with your TV signal, but gets split off through the use of a cable modem.

Cable broadband internet speeds have been increasing more and more in recent years. Factors affecting the speed include the modem itself, the cable network and number of users on the internet.

The technology differences are that DSL signals travel over standard copper wires in your home, whereas cable requires coaxial cable. The typical home transmission technology is Asymmetrical Digital Subscriber Line, or better known as ADSL. What this means simply is that the broadband connection is faster downstream (the data coming into your home) than upstream (data you send to the internet). It is always on and also coexists on the same wires as your local wire phone service without causing any disruptions.

Fiber optic broadband connections use light to carry data through tiny transparent glass fibers which are about the size of a human hair. Don’t let the size fool you however, as fiber broadband transmission signals can be many times faster than cable or DSL signals.

The speed of fiber broadband is dependent on a number of factors, but mainly how close to your home the fiber is located. Typical fiber installations do not connect directly to your home. Your local phone company most likely uses fiber as their main transmission media to get the signal to your street. From that point traditional copper phone lines would bring it into your home. As technology improves, it’s probably just a matter of time before fiber optic cables replace the copper cable to your home.

As the name implies a wireless broadband connection does not require a wire for you to access the internet connection. Typically, wired is used in rural applications where the cost of installing wires over a great distance for only a small number of customers are cost-prohibitive.

Recently, wireless broadband access has become more readily available to mobile telephone users. Cell phones can be “tethered” to allow your PC to access the internet. Although speeds are approaching some of those through cable or DSL, wireless is not inexpensive. Providers have to purchase licenses for the airwaves and the number of licenses for use are limited.

How to Find the Best Broadband Provider in Your Area

How to Test Your Broadband Speed

You can test your internet connection speed at: Consumer Broadband Test. This free site will explain to you what the speed test measures and what the measurements mean, including latency and jitter. They also provide a speed test for mobile connections.

Having Problems With a Broadband Provider?

In the U.S., file an online complaint with the Federal Communications Commission.