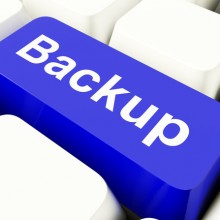 Managing home network backups is a task most people would rather not think about. With the rapid growth of inexpensive disk storage technology in home computers, the amount of data to be backed up has grown considerably. Thanks to further advances in technology, our lifestyles are becoming more digital adding to this storage growth. Our everyday home pictures, video, music and now increasingly HD movies are all fueling this digital storage growth. As more of our lives become digitized, it also becomes clear that we cannot afford to lose these new digital assets. Our home data needs to be protected.

Cloud computing is helping users with their data backups in many different ways. For example, portable devices such as smart phones and tablet computers today are largely protected by the content provider of your device. For example, Amazon’s Kindle devices are portable with the books you purchase being downloaded to the device. However, a copy of this content also remains in the “Amazon Cloud” meaning it can be downloaded again if you lose your Kindle.

Portable devices today store significantly less data than a personal computer with a 1 or 2 (even 3 or 4!) terabyte hard drive.

In the past several years quite a few different companies have started up services which offer “Cloud Backups”. This simply means that they upload your important data from your computer via your internet broadband connection and store it in their data center. This keeps you from losing your important data such as digital pictures, in case of computer failure, theft or if your home is destroyed.

Most home computers have two different types of data.

The first is the operating system. Many people purchase their computers with the operating system already installed. If their hard disk fails and has to be replaced, worst case scenario they have to purchase another copy of the OS (If they did not have a restore disk provided). Other than some money, no personal information has been lost.

The second type of data is the user’s own personal data. This could be in the form of pictures, videos, movies, documents and spreadsheets or even user installed programs and game data. If the hard disk fails and has to be replaced, this data cannot be replaced unless you have a backup in a different location which you can restore from.

The difficulty comes with knowing which data on your computer is your own, and which data is part of the operating system. Microsoft has made this easier to manage with their latest version of Windows 7. It’s a feature called Windows 7 Libraries.

What are Windows 7 Libraries? 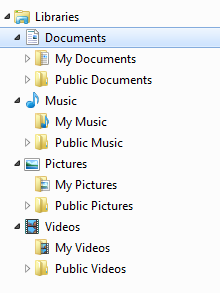 Libraries are a special kind of folder. It does not physically exist on your hard disk, but rather serves as a way for you to access a collection of real folders, which could be at different places on your disk. There are four different libraries created by default when you install Windows 7: Documents, Music, Pictures and Videos.

How to add Folders to your Windows 7 Library

Now say that you create a new folder on a different hard disk called “Work Documents”. You want this folder to be backed up along with your other documents. You need to add another folder to your “Documents” library by first right-clicking on the “Documents” library using Windows Explorer. Next, click on the “Properties” menu option. 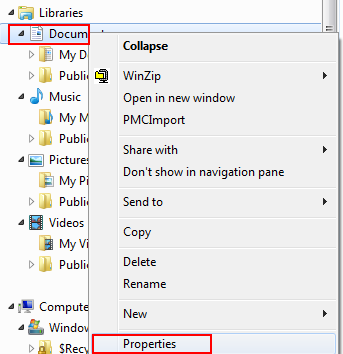 Once you’re in the “Properties” window click on the “Include a folder” button to select another folder and have it included in your “Documents” library. 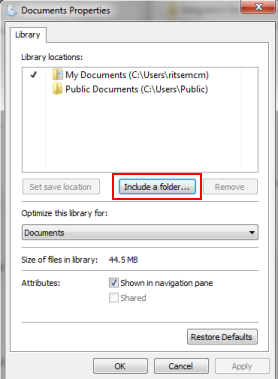 How do Windows 7 Libraries Help Backups?

For more information on Windows 7 Libraries, see: Find what you’re looking for – Staying organized in Windows 7.

Not all backups are created equal. If you purchase an external hard drive from your local computer or Costco store it more than likely will come with backup software you can use. Most often, these free backup software solutions will only backup your important data files, which you already have organized and know exactly where they are located on your hard disk. If this is all you need, then you are set.

However, if your hard disk fails and you replace it and are expecting to restore your entire hard drive with both your important data files and the operating system files, you need what is sometimes called an Image Backup, or System Backup. It could also be called a bare metal backup.

With a complete system backup, your entire computer can be restored to exactly the way it was when you last backed up. There is no need to first install the older version of your operating system and then upgrade it to the newer version, re-install any programs or games you purchased, and then finally reinstall your important data files. Everything is restored.

CrashPlan Onsite + Offsite Backup is a popular online backup solution provider. They offer unlimited storage in their data centers at a very reasonable cost. However, they do not offer a system backup solution. You might possibly be able to back up all of your system files, but chances are also pretty good that if you restored these to a new hard disk that it would not function correctly.

Acronis True Image backup software is another popular backup solution. At first look their software is more expensive than the Crashplan software. However, they do offer a solution for making a complete backup of your computer. They call it the “The Perfect Image”. So although you may find their software more expensive, it may be worth the cost – you simply need to understand the differences.

Many backup software solution providers offer both a system backup and also a cloud based backup option. Why would you want both? There are costs and benefits to both.

At first look a cloud backup solution appears to be the best option. There’s no need to purchase any additional external hard drives. Simply sign up for the service, then download and install their client software, configure the client backup software so it knows which folders and files to protect and then let it backup your files to their cloud storage.

Worse yet, many broadband data providers are putting monthly limits on the amount of data you can transfer. Say for example your monthly limit is 250GB, and you have a whole terabyte worth of data to backup, even if your broadband connection is fast enough to do this in a reasonable time you would use up four months worth of broadband service in the process. More likely, you would be hit with a very large surcharge for the extra bandwidth used during the initial upload.

A proper backup strategy would be to use both cloud backups and separate hard drive backups. You could backup your complete hard disk to your local external hard drive and also backup your important data files to cloud storage. If your hard disk fails and you need to restore, it can be done very quickly. If your house burns down then you can replace your computer with a new copy of the operating system and then download your important data files from your cloud backup storage.

If you’re really concerned about keeping a proper backup of your system, you could buy multiple external hard drives, backup your system and then store one in a different location.

Is RAID a Good Backup Solution?

Many people have heard of RAID, which stands for Redundant Array of Independent Disks. With RAID, you have multiple hard disks in your computer and RAID software stores your data in such a way that there are multiple copies on different disks. That way if any one disk fails, your data is still protected.

RAID is used in many companies in order to keep their systems running. For them, time is money and if their systems go down employees have nothing to do expect wait for the system. If a RAID solution is used, then the system remains running while a bad disk is replaced.

There are many different configurations of RAID. Dell, for a while sold RAID 0 as part of their top-of-the-line XPS desktop computers. RAID 0 makes multiple hard disks in your computer appear as one. The reason for this is that you can have a much larger total storage pool and also it can sometimes result in faster performance. However, with this scenario there is no backup protection. If one drive fails with RAID 0 then all of the data must be restored once the failed disk is replaced.

Overall, RAID is not an effective backup solution for most home networks. Even if you have RAID 1, which is mirroring – two identical hard disks store the same data, if you accidentally delete a file it will be deleted in both locations. If you download a root kit virus which renders your computer unusable, having the exact same copy of data on a second hard disk will offer you no solution to your problem.

For most home computers, RAID is not a cost effective solution for backing up your data. For more on RAID, see RAID (redundant array of independent disks).