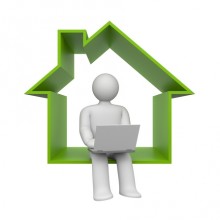 What is a basic home network? In short a home network has the ability to transmit and receive Ethernet data throughout your home to different network devices. Ethernet has become the standard for modern day networks, and as such requires different wiring and transmission devices than your standard electrical devices. It’s also more advanced that standard telephone cabling and different than cable TV.

An extended home network, with the ability to communicate outside your home with the rest of the world, today would require an Internet broadband data connection.

In its most basic form an Internet broadband data connection to your home allows you to communicate with the rest of the world using standard networking protocols. Most homes have already been wired for electricity, telephone and cable TV for some time, so connecting with the outside world is not something new. Broadband data is different, however, and requires more technology in your home.

You can find additional information on connecting broadband data to your home at What is Broadband?

The entry point into your home for broadband data is the gateway device. The job of a gateway is mostly to convert the signal coming from your broadband provider into a standard Ethernet signal for your home network. Broadband does not travel over the cable by itself; typically it carries on the same wire a TV signal, phone signal or maybe even an electrical signal.

Most modern internet broadband gateways also provide wireless networking for your home. This saves you the cost of purchasing your own. It used to be that the wireless router and broadband gateway were two separate devices. Most often today they are simply one device with the option to turn on the wireless networking. Usually there are at least 4 ports for wire Ethernet connections also, to meet the needs of simple networks.

Most often the gateway device is provided by your broadband data provider. As a result, it may sometimes carry a monthly cost. Some providers will give you the device as an enticement for signing up with their service. You can also purchase your own gateway device, but consider first whether it’s worth doing so. Your Internet service provider provides a gateway device which they support if there are problems. If problems occur with your own purchased device, they will be quick to pass the blame to you.

Home network distribution involves getting your Ethernet network signal from point A to point B in your home. The two spots can be right next to each other, which makes this an easy task or they can be on opposite sides of your home.

This decision raises the issue of a “Wired Home Network” versus a “Wireless Home Network”. Lately, there has been a third option using a “Powerline Adapter”.

Typically a wired network is faster and more reliable. This comes at a price though if your home is not properly wired for high-speed networking. Running network data cables through an existing home can involve a good deal of work and knowledge. If you’re not qualified to do this yourself, then hiring a professional to do the work could involve a large amount of money.

Wireless networking, alternatively, does not require any rewiring of your existing home. Networking speeds and reliability can be an issue depending on your speed requirements and the distance your wireless network signal must travel.

The chart below gives an overview comparison of the different networking distribution technologies currently available. Keep in mind that this is a simple overview only. Also, speeds are the “Advertised Speeds” meaning that actual results may differ. Most home networks will probably benefit most with a combination of these technologies. 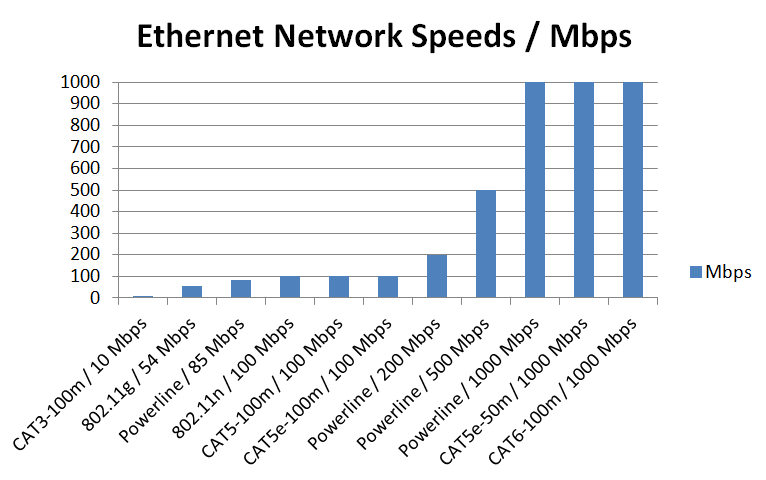 Wired networking is probably the fastest and most reliable. It comes with a cost in terms of wiring an existing home and having the expertise to make the connections, etc. Also, ALL components of a wired network must be at the desired CAT level in order to achieve the speed. This includes not only the cable but the connectors, outlets, network switch, patch panel, patch cables, etc.

Wireless networking has made a lot of advances in recent years. For most users it is more than adequate to meet their home networking needs. Actual speeds also vary by manufacturer and can be even higher than those listed above. Distance and frequency range are also factors to consider.

Powerline adapters are a newer technology but can be quite reliable. Installation is usually simple. Actual speeds vary by product manufacturer as well as the wiring in your home – It doesn’t work well for everyone (see Powerlines Instead of Wi-Fi To Speed Up You Home Network and Powerline Networking Adapters Keep Getting Faster).

This all depends on your requirements. If you need simply to access the internet and send/receive email or access a wireless printer then wireless networking will probably be more than sufficient. If you’re planning a home entertainment networks with HD video being streamed through your network then consider the following from How to interpret Ethernet cable Speed?

Network devices in your home are any technology devices with either a wire (RJ45) or a wireless adapter which allows it to connect with your home Ethernet network. In the past this has included mostly personal desktop computers, laptop computers and printers. Presently, more and more entertainment devices such as TV’s and set top boxes for internet based video are also connecting with your home network. This brings the added complexity of communicating between your computer type devices and your entertainment type devices.

In the very near future, if not already, home automation devices and security devices will also be connecting with your home network. There are thermostats available today which allow you to control your heating and cooling using your home network. As these network enabled devices become more common, they will make the home network as important in your home as the electrical wires are today.