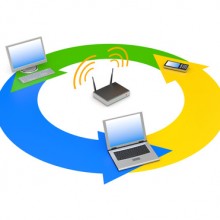 What Is a Wireless Network?

A home wireless network is typically referred to as Wi-Fi, which means Wireless Fidelity. In order for wireless networking to become affordable and popular, standards were created by which different manufacturers built there network devices to be compatible with. The most common specifications people are familiar with are the 802.11g and 802.11n specifications.

In the past wireless networks were much slower and unreliable than traditional wired communication. In recent years, many advances have been made with the wireless technology using the latest 802.11n specification. Wi-Fi can handle most normal home networking activities. Only the most advanced home networks, usually involving HD entertainment videos, still benefit from wired Ethernet.

You can access your network from any location that is within your wireless network’s coverage area. No need to carry extra cables or find a data outlet near your location. You can position your furniture without regards to the locations of data outlets. Your portable Wi-Fi devices are also connected to your network where ever you may be located in your wireless network.

Since there are no wires involved in connecting with a wireless network the cost is reduced. A wireless access point is required for the first device, but can be used for multiple devices in a home environment so expanding is simple using the existing equipment.

Wireless networks have advanced in robust security functionality. Keeping nearby neighbors from “sharing” your bandwidth can be stopped using simply security keys with most modern wireless access points having the feature enabled by default.

WEP was once the standard for wireless security. However, hackers found vulnerabilities in the WEP security and today it’s easy to find a program which can be used to hack into a wireless network based on WEP. This is no longer a recommended security setting even though many wireless routers have it available.

WPA is a step up from WEP security access. It is part of the 802.11i wireless network security protocol. Like WEP, WPA requires entering a password key when connecting with the network. WPA uses temporal key integrity protocol (TKIP) encryption.

MAC address filtering makes use of a unique hardware setting on your network device. Every network device has a MAC address, which becomes unique when added to your hardware. With MAC filtering, a password key is not needed to connect to your wireless router. Instead, you must add the MAC address to the router as a resource which is allowed to connect. Only these physical devices are allowed which make it a very secure option. It’s not as flexible however, as every time a new device is added to your network you will need to add the new MAC address to your wireless routers filtering table. It’s also not 100% foolproof as there are ways to “spoof” a known MAC address, making an unknown device able to connect with your wireless network.

Overall, wireless networks for home owners are simple and easy to setup. In most cases plug-in-play. In many cases the information to connect with your new wireless router are printed on a label applied to the side or bottom of your new router. The password will likely be a long series of digits and or characters, making it impossible to remember but also very unlikely for someone else outside your home to guess. It also eliminates the need for the home owner to log on to the router and configure it themselves. Quite often users find this process difficult and opt for no wireless security instead. Connection speeds continue to improve with every new wireless access router product manufactured.